As a new Berliner, you might be not familiar with German radiators and heaters, so here I introduce you to the German way of heating and ventilating. A side-effect of doing it wrongly is mould, so find here also how to prevent and remove mould.

First, it’s important to find out what heating system is in your apartment. Nowadays, there are two ones common: central heating and gas heating.

If you’ve got central heating it is pretty easy to handle. With central heating, the water for the radiators is heated centrally for the whole house, often in its cellar. Hot water is then transported via pipes to your apartment. How warm your rooms get depends only on how you set your thermostat directly at the radiator.

How a thermostat works

Most likely, your radiator will have such a thermostat. To heat properly, it’s crucial to understand how it works.

The most common misconception: The numbers from 0 to 5 do not stand for heating power directly. Instead, they reflect the desired temperature. So in way, thermostats work like an air conditioning system: You set it to your desired temperature (=level from 1 to 5) and then you just wait until the room reaches this temperature. Inside the thermostat, there is kind of a thermometer, letting it heat until it’s warm enough. Then it stops automatically and restarts heating only when the room temperature has dropped again.

How to use a thermostat

Unlike air conditioning, you usually can’t set the temperature directly, as the spectrum is numbers from 0 to 5 – so you need to find the right level for you just by try-and-error.

Heating does not happen quicker if setting to a higher level. For instance, if you come home after holidays and your room is very cold, it does not help to set the thermostat to 5 just to accelerate the heating. It simply won’t be quicker. If your ideal is level 3, then just set it to level 3.

When you’re not at home for some hours or a day, do not set it completely off – but to level 1 or 2. Generally, the temperature should should not go below 17 degrees in your room as furniture and surfaces will cool down, and it will then take longer (and thus cost more) to heat it all up again.

Plus: Cooler air can hold less water, thus water will then aggregate at the walls, leading to mould. (More on mould prevention below.)

On some thermostats, the lowest setting is a star (*). It’s called Frostschutz (frost protection / antifreeze) and will keep the radiator off – unless the temperature is so low that the water in the pipes could freeze. In that case, it lets the radiator heat again. So beware of opening the window widely for hours on cold winter days – on antifreeze, the radiator will start heating after a while. 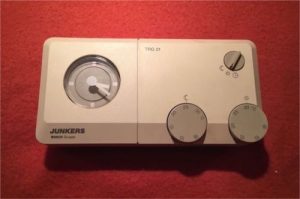 To control when to heat for the radiators, gas heating systems have a central controller, usually only in one room of the apartment. There, you can set up your ideal temperatures for day and night (and via the clock also, when your days and nights begin and end).

Because of this, the thermostat in the room containing the central controller should usually be set to maximum. It’s easy to see why: If it was set to 0 or to a low number, the gas heater would heat and heat but the radiator would still stay cold – a never-ending circle.

And here, often a problem begins in shared apartments: Imagine, your flatmate lives in the room containing the central controller and likes to have 19°C – but you in the other room want 22°C. Their setting will make the gas heater stop at 19°C – no matter whether you have set your thermostat even to level 5.

A solution might be: At the central controller, your flatmate should set a little higher temperature than actually desired, and their thermostat to a lower level, like 4 or even 3. Then more heating is needed to heat up their room, giving your room more time to heat up a bit more.

Tightly connected to correct heating is correct ventilation. Because ventilating wrongly can smash all your efforts to heat properly.

And basically, the rule simple:

For intense ventilation, you open the window fully for a short period of time, depending on the outside temperature:

in order to fully exchange the air in your room at once. The time varies because when the difference of outside and inside temperature is higher, air exchanges faster.

Do it at least twice a day, ideally in the morning and in the evening – with more people living in the room even more often. (A convenient way is to do it during brushing your teeth in the bathroom: It’s a simple trigger to do it twice a day, and you avoid being in the cold room while the window is open.)

Remember to set the thermostat to minimum while ventilating, as you don’t want to confuse the thermostat and blow all the precious heat out of the window.

Proper heating and ventilation is not only important for your well-being, but also for the well-being of your room and apartment. Following these tips above should prevent mould from appearing. If it however already appeared, then read on.

How mould is created

First, let’s understand how mould develops. It is produced by spores that are in the air, and once these spores land on a moist, suitable surfaces like wallpapers, they begin to grow. So the goal is: Do not have moist walls or wallpapers.

Moisture on wallpapers can come

Unless your house is completely rotten, moisture from outside is rather unlikely in a Berlin apartment. If your wall is mouldy, and if it’s an exterior wall, then most likely the humidity came from inside. Now, how could this happen?

Humidity inside is mostly created by… you – as you are a breathing and sweating mammal. So the air in your room becomes humid when you are in. To prevent the humidity getting on your walls, you can both

Both things are especially important if your house is not well insulated. You can check if your exterior walls feel cool when it’s cold outside.

If mould did still appear you can clean it with a special cleaner available in hardware stores (like OBI or Hellweg) – look for Schimmelspray*. A cheaper option is a chlorine cleaner like Danklorix, available in regular supermarkets. Look for the sprayer version for easier application. Careful when applying it as it smells strongly (like chlorine, obviously).

For more sustainable results, after cleaning you can repaint the spot with regular wall paint mixed with fungicide (Fungizid). You can buy paint already mixed with it (Antischimmelfarbe*), or buy only the concentrated fungicide and mix it yourself*. Ask in your hardware store for details.

If mould already became a problem with your landlord, and they are threatening to charge you with costs, here’s the legal situation in general:

So it’s rather smart to not pay directly and go to a (free) renter’s counselling first.

And finally some general tips. Some of them might be trivial but we always overlook the most obvious things, right?

That’s all for now. Following all those tips will likely give you a warm and healthy apartment. If you know more, I’d be happy if you leave them in the comments.

And don’t worry: Spring will be back soon! 😉

Links marked with a star (*) are affiliate links. If you click on such a link and then shop or order something, we will receive a commission for your purchase with which we can cover our expenses and keep the site free of ads. This does not change the price for you.

Are you paying fees for your bank account? Fees for money withdrawal on foreign ATMs? Fee for a credit card? Here I’ll give you an overview of free online bank accounts and how to open a bank account in Germany – no matter if you are a German or a foreigner. Read more

Public or private – especially as a freelancer/self-employed you have to choose your health care option in Germany. Read here about their costs, practical usage, and setup process. Read more

Your bank account in Austria costs you fees? There is no English support? There is no free Visa or Mastercard included? This can’t go on! Find here the best free Austrian bank accounts. Read more

For details about registration, recorded data, statistical analysis and email dispatch via the US service MailChimp please check our privacy statement.