It’s been now two years that I am using a German N26 free online bank account*, and since it is by far the most popular from all the free German bank accounts presented in this blog, I thought I sum up my personal long-term experience in a test of N26.

Back in 2015, I actually didn’t want to get N26 at first because I was already a happy customer of DKB for 6 years. DKB was one of the first German accounts without any fees, coming with a free Visa card and allowing free money withdrawal at every ATM worldwide. So what would I need more?

But I thought, let’s give it a try as a second account – what made me curious was how N26 was extensively using its smartphone app, coming with a lot more features than other bank accounts.

N26 has 3 types of accounts, and this review is about the standard one. It comes without any monthly fee, incl. a free debit Mastercard.

Debit means that it’s not a credit card where you first can spend and then later pay the balance – but you need to put money on it first and then you can spend it.

Additionally, you can also order a Maestro card for free. It’s another card used often for payments in Germany – but it’s needed less and less, as many shops now adopt the common Visa and Mastercard. I’d say: leave this card out at the beginning and see how far you can get with the Mastercard.

You also receive a regular IBAN number for SEPA transactions.

The most prominent feature: In the same seconds when you pay with your Mastercard, you receive a push notification on your smartphone, showing the price in EUR.

And actually, this is the killer feature for me. Because now I always know immediately:

Since then, I started using my Mastercard more often for payments not only where there was no other option (like for booking flights or similar) – but also in general, like in shops and bars. Because I can be less afraid of any misuse – any fraud I would notice immediately and I could block my card. (Which by the way never happened in these 2 years.)

The second big reason especially for you expats is N26’s official language support. I underline “official” because yes, other banks might find you a friendly English-speaking clerk when you want to open an account – but if later some problems arise, they probably might turn back to their official German-only communication.

N26 however will happily speak to you in English on their phone support. And N26’s app does speak even more, you can set the app interface to:

(See also the screenshots at the bottom.)

Update May 2020: By now, there are also more German Bank accounts with English support.

That’s actually a feature I don’t need much myself since for money withdrawal, I still use my DKB account. But also with N26, it is fairly easy.

You can withdraw money for free 3 times per month at any ATM in Germany, also
abroad at any ATM paying out EUR. (If it’s another currency, the fee is 1.7%.)

Three times per month may sound not much – but there’s an unlimited alternative:

With Cash26 you can get money paid out from your account by going to a shop or supermarket! And here are no monthly limits, CASH26 pay-outs are always free. Plus with CASH26, you are 100% safe from potentially scammed ATMs that might copy your Mastercard details.

All you need to do is select CASH26 in your N26 smartphone app and type in the amount you want to withdraw. The app will then generate a barcode which you need to show in the shop to the clerk. They will scan it and pay the money out to you.

You can see all these shops on a map in the N26 app. It seems that at least in Berlin, you don’t need to walk much more to the next CASH26 shop than to an ATM!

Interestingly, CASH26 also works the other way around: You can pay money into your account. (But not for free, a fee of 1.5% is applied.)

As said, with N26 I also started paying many regular purchases with my Mastercard, especially when being abroad. And the main reason for this: No fee worldwide, in any currency.

I just can go into any Polish or Danish shop without worrying if I have enough zloty or crowns and just get any little product I want, without having to go to some ATM priorly where I would get new bank notes, learn their sizes and forms, and later have unused coins that I would bring back home.

And also in Germany, paying with credit cards becomes more and more possible, in supermarkets it seems to work nearly everywhere already. Especially in winter flu season, it’s good that I can keep touching coins to a minimum.

What’s nice – Contactless pay: For amounts less than 25 EUR, I don’t even need to enter my PIN number, it’s just enough to hold the card over the reader. (And no, I’m not too much afraid of fraud, because as you remember, on every transaction I get immediately a notification, so I could immediately block the card then.)

Block only some transactions

To increase security, this is also one of my favourite features: I can partly block the Mastercard in advance for certain types of transactions. In particular, I can allow or disallow:

For instance, in my current setting I allow payments abroad (because I’m travelling) but disallow online payments and cash withdrawals. If I need to make an online payment, I just switch this setting on, make the payment and switch it off again – the changes take immediate effect!

With this, it’s barely possible to rob my money with stolen card data online.

By some smart algorithm my purchases get also categorised, and then the app draws me nice diagrams of the data. As a fan of visual data, that’s something for me!

When Googling about N26, you may find some criticisms on it:

For one, they apparently did cancel accounts of customers who were withdrawing money too often (back then, there was no withdrawal limit per month) – without prior warning them. That definitely was a bad move, however they then introduced the new rules, communicated more clearly and also invited the
cancelled customers back.

Then, an IT security expert exposed a lot or flaws in their technical design. He then was invited to do an audit on their premises and concludes in the video himself that they have closed all the known gaps. You can also read their reply in the first comment under the video.

Update 2019: Recently, their customer service got some bad reputation as N26 keeps growing and they have a hard time in keeping up the growing number of enquiries. Therefore, currently I’d recommend N26 rather as a second spending account, e.g. for travelling – just as I’m doing it. For your main account, you might use either the free DKB account (see a comparison of N26 and DKB), or just another free German one. 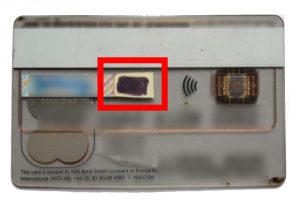 Besides the tip of partially blocking some type of transactions (see above),  finally a little tip to increase the security even more: On the back side of the Mastercard there is the 3-digit CVC2 code. It’s the one used for transactions over the internet, where you not only need to enter your credit card number but also this code.

I memorised this code and then sticked a little post-it paper on it so that it’s hidden now on the card. Thus I avoid that some shop clerk who I give my card to can remember or copy it. At a shop transaction, this code is not necessary and is also not allowed to be asked for.

I don’t regret opening this account and happily keep using it, especially while travelling and on direct purchases in shops and supermarkets. I love the immediate push notifications and that I can block particular transaction types. For money withdrawals, I use my Visa card from my DKB account so I’m not affected by the withdrawal limit.

Update November 2020: By now, a few more free bank accounts with English support appeared in Germany. Especially Vivid is a very interesting offer – and comes with a €20 gift.

Links marked with a star (*) are affiliate links. If you click on such a link and then shop or order something, we will receive a commission for your purchase with which we can cover our expenses and keep the site free of ads. This does not change the price for you.

Free German bank account? “N26!” was the usual answer – until now. With Vivid there’s a new English speaking offer on the market that is not only free – but even pays you: with Cashback up to 10%. Read more

In my overview of free German bank accounts, two of them are my favourites: N26 and DKB. If you cannot decide between them, read here a side-by-side comparison of the two and my conclusion at the end. Read more

Living in Germany but your German is not yet on C2 level? No worries, a few bank accounts speak English (or even more languages), have not basic fees, come with a Visa & Mastercard and offer free ATM withdrawals. Don’t believe it? Then read on. Read more

For details about registration, recorded data, statistical analysis and email dispatch via the US service MailChimp please check our privacy statement.